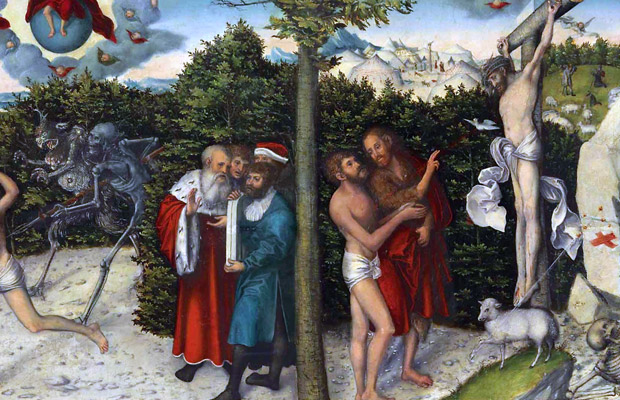 The self-assured pastor set himself as an example for his congregation. “I really don’t sin anymore,” he said. “Sure, when I was young, I might have sinned. But, now that I am older in the faith and more mature, I don’t sin anymore.”

This is not a fictional story or an exaggeration to make a point. These words actually were spoken in an American, non-denominational congregation in the recent past. This pastor actually believed that he did not sin and that if others in his congregation would follow his example, they could be without sin too.

The pastor was teaching a false doctrine about human beings (that they could live without sin). This heresy contaminated his related theological teachings regarding justification, the atonement of Christ, the grace of the Sacraments, and even the nature of Christian worship. When the Word of God was twisted and the Original Sin of Adam was forgotten and the continuing sin of humanity was denied, the true Gospel of Christ was lost.

You may think that this failure in a modern church is a problem particular to our time. The truth is, this same failure has been with us from the beginning of the church and was especially apparent at the time of the Reformation, 500 years ago.

In the years 1537 to 1540, the town of Wittenberg was torn apart by theological controversy. The chief spokesman of the false doctrine was John Agricola and the name that Luther gave his falsehood was “Antinomianism.” Luther coined the term meaning: against (from the Greek “anti” ), the law (from the Greek “nomos”). Antinomianism was against the law of God.

It was claimed by Agricola that Luther had rejected the law of God, the Ten Commandments. By misrepresenting Luther, Agricola supported his own notion that the law of God was unnecessary and inappropriate for believers. Agricola said that believers did not need the law, they only needed the Gospel. Therefore, pastors should no longer preach the law of God to Christians.

Luther responded with two sermons in 1537, warning against this theological error and against the moral corruption that it engendered. In addition, Luther arranged for a disputation with Agricola in 1537. Agricola failed to appear. A second disputation was scheduled in 1538 in which Agricola admitted his errors. Dr. Luther forcefully argued that the law of God must be preached before the greatness of the gospel could be realized. This is true for the believer as well as for the unbeliever, said Luther. Unfortunately, the controversy continued, and Luther arranged a third disputation. Agricola was absent yet again.

In a treatise published in 1539, Luther provided one of the primary documents of this controversy. In it, he addressed the false doctrine of the Antinomians and the proper place of law and gospel.

The devil devotes himself to making men secure, teaching them to heed neither law nor sin...It seems to me that these spirits think that all who are listening to the message are pure Christians, without sin–though in reality they are dejected and downcast hearts who feel their sin and fear God and who therefore must be comforted. (Against the Anitnomians: LW: 47, p. 111.)

Luther taught that Christians need to be stirred to repentance because they are still sinners. They must not be allowed to become complacent in their sin or self-righteous in their denial of it. Luther asked how anyone could think that he, who had written so many teachings and sermons on the Ten Commandments, could abandon them. In fact, Luther declared, “I myself, as old and as learned as I am, recite the commandments daily word for word like a child.”

Dr. Luther encouraged pastors to preach the pure doctrine, always including the law and the gospel. It was not enough to preach only the grace and suffering of Christ, the terrors and punishment of the law also were necessary. Luther explained that sin must be preached wherever Christ is preached:

For who could know what and why Christ suffered for us without knowing what sin or law is?...For the law terrifies me more when I hear that Christ, the Son of God, had to fulfill it for me than it would were it preached to me without the mention of Christ and of such great torment suffered by God’s Son, but were accompanied only by threats. For in the Son of God I behold the wrath of God in action, while the law of God shows it to me with words and with lesser deeds. (Ibid., p. 113.)

Lest we make the same mistake as Agricola, we must understand the purpose of the law and the gospel, based upon a right theology of the sin of humanity.

Much like our own day, the church in Luther’s day taught a theology of human glory. Human reason, human holiness, and human works stood in the center of Medieval theology. Luther called this a “theology of glory,” whereby human beings captured and earned God’s favor by their own holy works. The theology of glory encouraged and exalted human efforts in order to obtain God’s favor and eternal blessing.

Luther responded to the human-centered theology with a Christ-centered theology, a theology of the Cross. In it, he exposed the reality of human sin, as described clearly in Paul’s letters to the Galatians and the Romans. Without faith in Christ, all human beings are dead in their sin. They cannot approach God, cannot choose God or have faith in God, and cannot properly fear, love, and trust God. The center of biblical faith and true theology is not human action, but the merciful and all-sufficient sacrifice of Jesus Christ on the Cross.

God’s Word and Sacraments create faith in the heart of the believer. By that faith, the righteousness, blessing, and life of Christ are inputed to the believer, and the sin, punishment, and death of the believer are imputed to Christ. Believers are passive recipients. They passively receive God’s faith-creating Word and Sacraments. They passively receive Christ’s righteousness that yields God’s favor and results in God’s eternal grace. Before God, humanity must always remain the passive recipient of passive righteousness, imputed by grace through faith.

However, once faith is received, the believer is moved by God’s Word and Spirit to serve the world. Here, the believer participates in an active righteousness. The believer’s actions are not perfect, but they are inspired by the living Christ who is within the heart of every believer. The redeemed imperfectly obey God’s commands and do God’s will according to the Word and Spirit that are theirs by grace through faith. Righteousness before God comes not by doing, but by believing. Righteousness before one another comes as a result of works performed according to the power and guidance of the Holy Spirit. (An excellent article by Robert Kolb is found in Lutheran Quarterly: Vol. XVI (2002), “Luther on the Theology of the Cross.”)

Right Use of the Law

Though the power and domination of sin are removed from the believer, and though the wrath of God for sin is imputed to Christ, the believer still struggles with sin as long as he or she lives in the flesh and in the world. For this reason, both the unbeliever and the believer have continuing need for the law of God.

The Formula of Concord: Solid Declaration, Article VI, “Third Use of the Law,” provides a clear explanation. First, the law of God functions as a rule and discipline in the civil arena. It preserves society’s safety and decency. Second, the law of God confronts people with the knowledge of their sin and drives the repentant to the Cross of Christ for forgiveness. Third, those who have been converted and are now free from bondage to sin and bondage to the law, still benefit from the law as a guide in Christian living.

For the law is a mirror in which the will of God and what is pleasing to him is correctly portrayed. It is necessary to hold this constantly before believers’ eyes and >continually to urge it upon them with diligence. (Formula of Concord: Solid Declaration, Article VI: 4.)

For although their sins are covered up through the perfect obedience of Christ, so that they are not reckoned to believers for damnation, and although the Holy Spirit has begun the mortification of the Old Adam and their renewal in the spirit of their minds, nevertheless the Old Adam still clings to their nature and to all its internal and external powers. (Ibid., Article VI: 7.)

False doctrines and heresies are still very much alive in the Christian Church today. One false doctrine will inevitably pollute all related doctrines. For, when the Word of God is not rightly preached and the Sacraments are not administered in their purity, the truth of the Gospel can quickly be lost. Typically, one of two things results: either the people become arrogant pharisees who believe that they truly are without sin, able to satisfy God’s righteous law with their own holiness, or the people recognize the depravity of their own sin and are crushed under the weight of God’s judgement.

In both of these cases, the law and gospel of God’s Word and the clear declarations of the Great Reformer, Martin Luther, provide a necessary safeguard. The Word of Christ that was made known at the time of the Apostles and capably defended at the time of the Reformation is ours today. Let us celebrate the 500th Anniversary of the Reformation! Let us faithfully proclaim what we believe, teach, and confess!