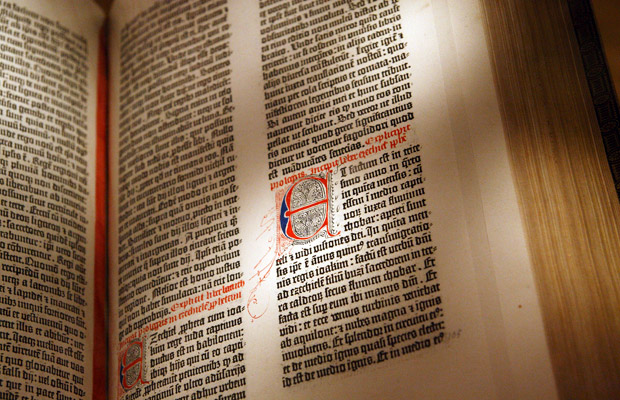 Imagine, if you would, a worship service that is designed much like a sporting event. Enter the superstar, the embodiment of strength with style. Assisted by several supporting players, this Most Valuable Player performs virtually all of the “action” that takes place. The occasion is enhanced by inspiring music, performed by talented singers and musicians. The arena is filled with spectators. But, these onlookers know that they have no active part to play. They have come only to observe and appreciate the actions of those more gifted than themselves.

You may think that I am writing about a contemporary television evangelist or a popular mega-church minister. I am not. I am writing about worship in the late Middle Ages, just prior to the Lutheran Reformation. Still, I think that there are some clear similarities between today’s entertainment-driven religious experience and Christian worship in the early 16th century.

In Luther’s day, the situation for the average Christian worshiper was worse than simply being a passive observer of the Catholic Mass. We must remember that the service of worship was not conducted in his or her own language. The service was in Latin, so the average German worshiper literally did not know what was being said. He or she could not participate by speaking the liturgy or singing the hymns. Moreover, the Holy Scripture was not yet translated into German, so he or she could not even know the message that was supposed to be delivered.

The result of centuries of worship without Scripture or sound doctrine was the establishment and maintenance of a superstitious population that did not know the Word of God and did not trust the mercy of Christ. Instead, they feared the judgment of God and awaited His divine punishment. They believed that the clergy were the spiritual elite, like especially gifted athletes. But, the laity were the spiritually inferior, whose place was to observe from a spectator’s distance the events of divine worship. For them, religion was an endless list of sins to be avoided and good works to be performed with only death and judgment awaiting them.

A Reformation of Worship

The reforms that Luther brought to Christian worship were nothing short of astounding. It is as if he walked into a room that was as black as night, and switched on the light! The first change that Luther made to Christian worship was to hold every word in the Divine Liturgy accountable to Holy Scripture. Most of the components of Divine Worship were already taken directly from the Bible. For example, the Kyrie (Lord, Have Mercy), Gloria in Excelsis (Glory in the Highest), Sanctus (Holy, Holy, Holy), Agnus Dei (Lamb of God), and Nunc Dimittis (Now Let Depart) came directly from God’s Word. However, the prayers and proclamations that surrounded Holy Communion in the Roman Catholic Mass did not come directly from Holy Scripture. Luther changed the consecration of the Lord’s Supper to conform exactly with God’s Word. In this way, the Holy Communion could no longer be misinterpreted as an act of the priest offering Christ to God, but was rightly understood as an act of God giving Christ to each believing worshiper.

The next reform that Luther made was to translate the Holy Bible and the Divine Worship Service into the language of the people. Gutenberg’s Printing Press made Luther’s publications accessible and affordable. Suddenly, everyone, everywhere was able to receive the message of God’s Word for him or herself. This was an unimaginable change. God’s life-giving and saving Word spoke directly to human hearts and minds, creating faith and teaching God’s truth. In addition, Luther wrote a large number of new hymns that taught exactly why Jesus had come and what Jesus had done in order to bring love, mercy, and salvation to all people, by grace through faith. Luther used well-known tunes and common language to tell the truth of the Gospel of Jesus.

Thirdly, Luther restored to worship the primacy of Word and Sacraments. The Divine Liturgy has two high points: the preaching of the Word, and the administration of the Sacrament. Luther restored the importance of the preaching of God’s Word as Law and Gospel, and clarified that the chief article of the faith is that humanity is justified by grace through faith apart from works of the Law. Also, Luther declared that the Sacrament of the Altar is God’s gift of the true body and blood of Jesus, for the forgiveness of sins and resurrection to eternal life, for all who believe Christ’s words, “Given, and shed for you, for the remission of sins” (See Luther’s Small Catechism: The Sacrament of the Altar).

Finally, Luther clarified the definition of the church, the power of the laity, and the purpose of the clergy. In short, the church is the assembly of believers where the Word of God is rightly taught and the Sacraments are administered in their purity. For this purpose, God has instituted the Holy Ministry, so that through the Word and Sacraments, as instruments, the Holy Spirit may create faith and justify unto eternal life those who believe. All believers are part of God’s holy priesthood; each one has a vocation of service that is completely acceptable to God. Clergy are no better saints and no worse sinners than all the rest of God’s redeemed. However, the ordained have been called by God and His church for the purpose of rightly preaching and teaching the Word of God and administering His Holy Sacraments in their purity. The clergy serve Christ and His church as spiritual shepherds, with authority and responsibility prescribed in Holy Scripture. For this reason, they are given a stricter judgment and held to account before God’s throne for the souls in their keeping (See Augsburg Confession: Articles IV-VIII, James 3:1 and Hebrews 13:17).

A Message for Today

Today, it is still possible to find churches that function like arenas of spectators, with seats for distant observers. It is possible to find those who consider themselves to be spiritual superstars, who enjoy the adulation of the crowd and believe in their own spiritual superiority. Even in this age of information at our fingertips, there are still those who do not know what the Bible teaches and those who are false teachers in the Name of Christ.

The lessons of the Reformation, therefore, are just as relevant today as they were 500 years ago, and the teaching of the great Reformer is just as much needed today as it was then. The American Association of Lutheran Churches makes no apology for accepting and believing in the Bible as the infallible, inerrant Word of God. We encourage all of our members to have regular, daily devotions and to read the Scriptures for strength of faith and guidance in life. Moreover, we are proud of our heritage of liturgical worship, knowing that its roots are found in the Last Supper liturgy of Jesus with His disciples. We rejoice that worship is the assembly of believers whom God has called, gathered, enlightened, sanctified, and kept in the one true faith. In worship, God feeds His people with His Holy Word and precious Sacraments which we receive with shouts of joy and declarations of faith.

For this reason, we do not worship as spectators who are far removed from the real action of God. No! We are active participants, fully engaged on the field of God’s mighty salvation victory. In the Divine Service, Christ comes to us and does God to us! Through His Word and Sacraments, God acts directly upon us. We are restored, revived, and renewed. As redeemed children of God, the promises of Christ are applied to us, and by grace through faith, we are forgiven and forever His! Hallelujah!