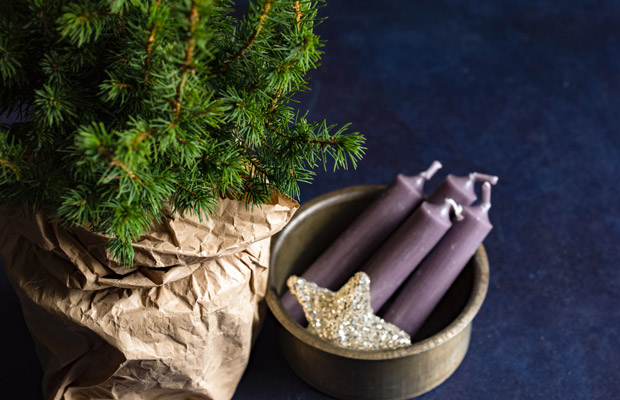 Have you ever wondered how Luther celebrated Christmas? Legend has it [1] that the lighted Christmas Tree owes its origin to Martin Luther. One Christmas Eve as he was walking home through the forest, Luther was struck by the extraordinary beauty of the stars shining through the glistening evergreens. Once home, he tried to explain to his family his thoughts about the starry sky above the Bethlehem stable on the first Christmas Eve. When words failed to do justice to the inspiration in his heart, Luther cut down a small fir tree and placed lighted candles upon it in his own home.

Another story of Luther’s home is recorded in an article by Paul L. Maier, “Celebrating Advent with Martin Luther.” [2] The Luther house was a converted monastery on the east side of Wittenberg. Its spacious accommodations were home to Martin, Katie, their six children, and many students who also stayed there. One student recalls that as Christmas approached each year, Luther’s heart was increasingly buoyed and cheerful. Imagine Luther breaking into song as his family and friends gathered around the dinner table!

The first Protestant hymnal was published in Wittenberg. It contained eight hymns in German, four of which were written by Luther. Tradition credits Luther with the composition of the famous carol, Away in a Manger, though modern scholars are unsure of its authorship. However, we are certain that Luther wrote another famous carol. Evidently, it was a Christmas gift from Luther to his five year old son, Hans. It is titled, Vom Himmel Hoch. You may know the carol by its English title, From Heaven Above to Earth I Come. It is a spectacular hymn telling the story of the coming of the Christ child in fifteen verses!

From what is written above, you may have the impression that Luther’s Christmas was a comfy-cozy time of lighted trees, lullaby carols, and a warm fire, while visions of sugarplums danced in his head. If I have given you the idea that this is the extent of Luther’s Christmas celebration, I have terribly misled you. It is in the preached Word that Luther most clearly demonstrates the heart of his Christmas celebration. Even a cursory glance at his sermons will prove that his was no superficial or sentimental observance.

One of Luther’s most famous Christmas Sermons is found in his Wartburg Church Postil, 1521-1522. This glorious declaration on Luke 2:1-14 is 78 paragraphs in length and includes Law and Gospel, sin and redemption, God’s glory and humanity’s hope. In the excerpt below, Luther reminds his Christmas congregation to love Christ by serving others.

Now let every one examine himself in the light of the Gospel and see how far he is from Christ, what is the character of his faith and love. There are many who are enkindled with dreamy devotion, when they hear of such poverty of Christ, are most angry with the citizens of Bethlehem, denounce their blindness and ingratitude, and think, if they had been there, they would have shown the Lord and his mother a more becoming service, and would not have permitted them to be treated so miserably. But they do not look by their side to see how many of their fellow men need their help, and which they let go on in their misery unaided. Who is there upon earth that has no poor, miserable, sick, erring ones, or sinful people around him? Why does he not exercise his love to those? Why does he not do to them as Christ has done to him? It is altogether false to think that you have done much for Christ, if you do nothing for those needy ones. Had you been at Bethlehem you would have paid as little attention to Christ as they did… [3]

Clearly, Luther pulled no punches. He preached the complete Word of God without restraint. Just because it was Christmas, he did not give his congregation “dreamy devotion.” Nor did Luther dumb down his theology for the sake of the illiterate and uneducated masses. On the contrary, his preaching included clear explanations of Greek, Hebrew and Latin terms in order to provide his congregation with genuine, biblical truth. In Luther’s Christmas Eve Sermon on Titus 2:11-15, preached in 1522, Luther gave an explanation of ungodliness.

The appearing of grace, Paul says, instructs us in two things: one is described as "denying ungodliness and worldly lusts." We must explain these terms. The Latin word "impietas," which the apostle renders in the Greek "asebia" and which in Hebrew is "resa," I cannot find any one German word to express. I have made it "ungoettlich wesen," "ungodliness." The Latin and Greek terms do not fully convey the Hebrew meaning. "Resa," properly, is the sin of failing to honor God; that is, of not believing, trusting, fearing him, not surrendering to him, not submitting to his providence, not allowing him to be God. In this sin, those guilty of gross outward evils are deeply implicated indeed; but much more deeply involved are the wise, sainted, learned ecclesiasts who, relying upon their works, think themselves godly and so appear in the eyes of the world. [4]

It has been argued that Luther’s clear proclamation of the Word of God and accessibility to it through his numerous pamphlets, sermons, and books, produced the most theologically astute and biblically informed populous in Western history. Could we positively influence our congregations and communities by following his example?

Though I am not suggesting that our clergy immediately begin to include extensive Hebrew and Greek exegeses in their preaching, I am suggesting that, like Luther, we need not apologize for preaching the pure Word and full counsel of God. Instead of satisfying society’s desire for a romantic holiday with a sermon of “dreamy devotion,” what we truly need is a clear presentation of humanity's sin and Christ’s incarnation for our redemption!

Truth be told, the trees are lovely and the carols are breath-taking. The presents are generous and the foods sumptuous. But, a cozy fire and a snow white landscape will not comfort a troubled heart, bring hope to a desperate soul, or save a fallen world. How did Luther celebrate Christmas? Of course, he enjoyed carols, trees, and gifts. But, Luther knew that the true beauty and eternal joy of Christmas were found in only one place, the Infant Child in the manger. This profound mystery is the Word that he preached and the carol that he sang:

From heaven above to earth I come to bear goodness to every home; glad tidings of great joy I bring, whereof I now will say and sing.
This is the Christ, our God and Lord, Who in all need shall aid afford; He will Himself your Savior be from all your sins to set you free.
Ah, dearest Jesus, holy Child, make Thee a bed, soft, undefiled, within my heart, that it may be a quiet chamber kept for Thee.
My heart for very joy doth leap, my lips no more can silence keep; I, too, must sing with joyful tongue that sweetest ancient cradle-song.
Glory to God in highest heaven, Who unto us His Son hath given! While angels sing with pious mirth a glad new year to all the earth. [5]