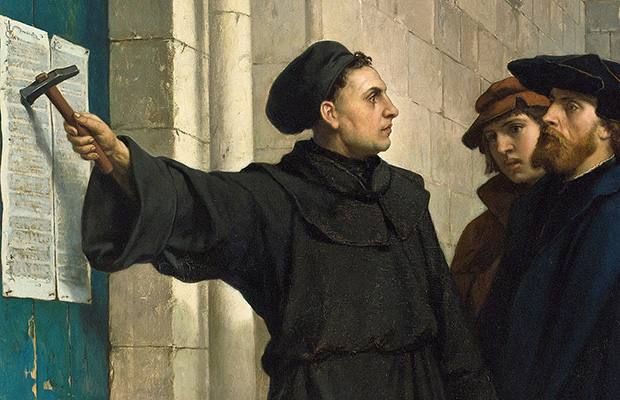 How would you describe the world? It could be described as besieged by an expanding Caliphate, beleaguered by social unrest, influenced by pervasive secular humanism, and plagued by a general mistrust of all in authority, even those of the Christian religion. How would you describe society’s reaction to the Christian faith? One could make the case that while this is a time of genuine spiritual hunger across all age groups and economic strata, it is also a time of societal disconnection from biblical authority, and widespread ignorance of biblical truth.

You may think that I am writing about the United States in the 21st century. I am, in fact, describing Luther’s Germany at the beginning of the 16th century. You may not have realized it, but many of the same influences that affected life and faith at the time of the Reformation are affecting life and faith in our time today.

Is it possible that the same kind of spiritual renewal and church-wide Reformation that characterized Luther’s day may come to characterize ours as well? Is it possible that the rethinking and reshaping of religious faith and life that God engineered in Luther’s day may be in God’s plan for our own? Regardless of whether we are destined to be involved in a significant religious movement or just attempting to live a Christian life in our current situation, there are a number of things that we can and should learn from the Lutheran Reformation that will give us helpful guidance in our Christian witness today.

What follows is the first of four articles on the importance of the Reformation for Christian living today.

On October 31, 1517, Martin Luther posted 95 Theses on the Castle Church door at Wittenberg. Luther was responding to a papal fund-raising campaign by Johann Tetzel, a Dominican friar who was named the Grand Commissioner of Indulgences and was selling them throughout Germany.
What were indulgences? In exchange for meritorious work or money, the church offered persons relief from God’s punishment by drawing from the Treasury of the Merits of Christ and the Saints. The Roman Church taught that even though one had received forgiveness of sins by contrition and confession, because of God’s holy righteousness, God still required punishment. If punishment were not completed upon the earth, punishment would continue in purgatory. An indulgence could reduce or even eliminate that punishment!

The Grand Commissioner’s terrifying preaching about purgatory and his false promises about indulgences angered Luther. Tetzel claimed that anyone who bought an indulgence would be “cleaner than when coming out of baptism,” and that “the cross of the seller of indulgences has as much power as the cross of Christ.” He went so far as to declare that an indulgence could apply not only to the living but to the dead. The dead did not need contrition and confession, they simply needed your money. The Grand Commissioner proclaimed, “When your coin in the coffer rings, the soul from purgatory springs!”

Luther’s 95 Theses were a call for theological debate about this practice. More than that, the 95 Theses became the spark that lighted the fire of the Reformation. Soon, Luther was required to defend his positions in theological disputations. Luther would not accept Church tradition or council or pope as the ultimate authority in matters of faith. His sole authority was the Word of God. The sale of indulgences was not found in Holy Scripture. On the contrary, the Bible taught that sin and punishment were imputed to Christ Jesus by grace through faith. Likewise, by faith, Christ’s righteousness and forgiveness were imputed to all believers. A theology of the Treasury of the Merits was not found in Holy Scripture either. Christ’s mercy and grace were given freely to all those who believe. They certainly were not sold for money! Mary and the saints had no surplus merits, but were sinners just like the rest of us. They did not earn their way into heaven, but relied upon the all-sufficient sacrifice of Christ on the Cross, as do all believers.

Debates about indulgences, purgatory, and the Treasury of Merits, plus Luther’s continuous study of God’s Word, led the Reformer to many profound theological insights. For the sake of this article, we mention only two. The first was the article by which the Church stands or falls:

“Justification by grace through faith.” Luther realized that human beings continue to try to merit God’s favor and earn their way into heaven. The Reformer objected to any claim to being righteous before God based on human merit or achievement. Justification and righteousness were given solely by grace through faith in Jesus Christ. As St. Paul writes in Romans 3:21-24:

But now apart from the Law the righteousness of God has been manifested, being witnessed by the Law and the Prophets, even the righteousness of God through faith in Jesus Christ for all those who believe; for there is no distinction; for all have sinned and fall short of the glory of God, being justified as a gift by His grace through the redemption which is in Christ Jesus.

A second and related truth for Luther was the absolute authority and reliability of Holy Scripture. Luther rejected any unbiblical theology or practice of the Church of Rome, and relied solely upon the Word of God. As he declared to Emperor Charles V and the Electors of Germany at the Diet of Worms in 1521:

Unless I am convicted by Scripture and plain reason—I do not accept the authority of popes and councils, for they have contradicted each other–my conscience is captive to the Word of God… God help me. Amen

Today, the Roman Church continues to claim that humans must perform certain works of faith in order to gain salvation. Even the Sacrament of the Altar is viewed by Roman Catholics as a work of man that is offered to God for forgiveness and salvation. Of course, this is exactly the opposite of the truth. The Sacrament of the Altar is Christ’s gift of forgiveness and salvation that is offered to us and received by faith.

Many Protestants have lost hold of what Luther called the “chief article,” justification by grace through faith. Some erroneously claim that humans are basically good, or that they can cooperate in their conversion, or that they can do good works that merit eternal life. Have they forgotten that we all have inherited the sin of Adam (Rom. 5:12-21); that, as such, we are enemies of God (Rom. 5:10); and that the wages of our sin is death (Rom. 6:23)? Ultimately, if any part of salvation is dependent upon human actions, works, or merit, we are doomed to failure. More importantly, such teaching directly contradicts Holy Scripture, which declares that before conversion we are dead in our sins (Eph. 2:5; Col. 2:13), and our justification is by grace alone through faith alone, apart from any works of the Law (Rom. 3:21-28; Eph. 2:4-10). How is it possible for people to lose sight of things taught so clearly in God’s Word?

Unfortunately, even some Lutherans have lost sight of the truth of justification by grace through faith. A 1970 survey of nine million Lutherans revealed that 40% believed that they were going to be saved and justified by their works, not by faith alone in Jesus Christ. A study done in 1997 indicated that the number of Lutherans who believe God is satisfied by their good works grew to over 56%. Many important biblical truths like this one have been lost because the authority and inerrancy of Holy Scripture have been diminished or destroyed in our time.

The articles of faith that we Lutherans hold dear are as important in our day as they were in the time of Luther and the Reformation. It is still crucial that we help all people to recognize their sin before God. It is still essential that we speak the Gospel message that they are justified by grace through faith in Christ Jesus apart from works of the Law. It is still fundamental that we declare to them that the Bible is the inspired, infallible, and inerrant Word of God which is His true proclamation of salvation for them and for people of every time and place.

The Reformation message is still needed today! Declare what we believe, teach, and confess to all who will hear! Be as bold as Luther!

Sources helpful in writing this article are: