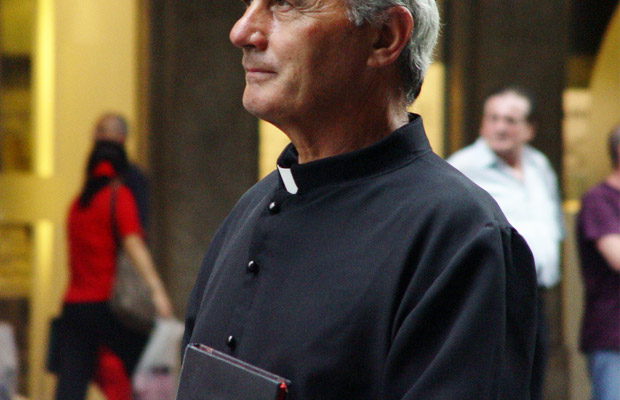 The weekend had been a busy one: a plane ride to a distant city on Friday, an all-day Conference and several important conversations with Pastors on Saturday, Worship Service and more conversations on Sunday. I had been driven back to the airport and was waiting for my flight home. If all went well, I would arrive back in Detroit by 11:30 PM and home by 1:30 AM Monday.

The airport was crowded and busy. I found my gate, sat down, and called my wife. “I can’t wait to get home. Don’t wait up...” Suddenly, a twenty-something woman ran up to me and fell at my feet! She was shaking and upset, “Father,” she said, “my mother has just died!” (I was still wearing a clerical collar from Word and Sacrament ministry that morning.) The woman’s young husband had come up behind her. He held their baby in his arms. Still on her knees, the young woman pleaded, “Please, pray the Our Father.” I motioned for the husband to come and stand close to his wife.

With her face in her hands, she was crying. I placed my hand on her head and began the prayer that Our Lord taught us. “Our Father who art in heaven, hallowed be Thy Name...” At the conclusion of the prayer, I continued with the 23rd Psalm: “The Lord is my Shepherd, I shall not want...”

I finished the Psalm, made the sign of the cross on her forehead, and asked the young woman her mother’s name. “Almighty Father, we thank you for ___, and we commend her to your loving care. We thank you for the promise of Christ our Lord: ‘I am the resurrection and the life. He who believers in Me, though he were dead yet shall he live, and whosoever believes in Me shall never die.’ We bless You Lord, that by Your grace, You have opened the Kingdom of Heaven to all believers, and that to be absent from the body is to be present with the Lord.”

I prayed for the young woman, that Christ our Savior would comfort her in her sorrow and strengthen her in faith. I closed the prayer with a portion of the ancient Roman Catholic Requiem (Funeral Service) that is included in the Lutheran Commendation of the dead: “Grant her Lord eternal rest, and may she dwell in light perpetual. Amen.”

The young woman remained on he knees, weeping in the crowded airport. Standing, I introduced myself to her husband. I met their son as the young woman composed herself. After a moment, I talked about normal grief experiences that she may have in weeks and months to come: guilt, depression, denial, even anger. I reminded him of the importance of faith in Christ, and the extra support that his wife would need especially on special occasions: Mother’s Day, Thanksgiving and Christmas, Mom’s birthday.

For the previous several minutes, the crowded airport had receded into the background. Suddenly, I realized that people were standing all around us. My plane was being boarded. I needed to excuse myself. The couple expressed their appreciation, thanking God for sending a priest. (This point is very important. They did not thank me, as such. They were thanking God for providing one who performed a needed function.)

I quickly boarded the plane and found that I was seated next to a young oriental man. Seeing my collar, he asked, “Are you a priest?” “I am a Lutheran Pastor.” I asked him, “What is your religion?” He said, “I do not have one, but I have some questions about Christianity.”

What followed was a 2 and 1/2 hour conversation about the sin of humanity, the mercy of God, the incarnation of God in flesh, the all-sufficient sacrifice of Christ, and the gifts of forgiveness and eternal life that come by grace through faith in Jesus Christ. It was apparent and he acknowledged that the Word of God was at work in his heart.

THE UNIFORM OF THE OFFICE

However, it does mean that there are times and places in which it is especially appropriate for your Pastor to wear a collar. It indicates that he is trained (theologically educated) and certified (rightly called) to do his job. People who have never met your Pastor may talk with him about personal issues and ask spiritual questions. Why? The collar is the uniform that tells them that this man bears the authority and responsibility of the Office of the Ministry.

It is true; the collar is not required for him to function as a Pastor. At times, it is possible that the collar may even make it more difficult for him to function as a Word and Sacrament Minister. But, in many circumstances, the collar is the appropriate uniform for one who serves in the Office of the Ministry. One who is serving in Word and Sacrament Ministry no longer represents himself. He represents the Lord and the Church who clothed him in the Office.

This article was first published on Theopneustos.